The Best Restaurants in Stoke Newington 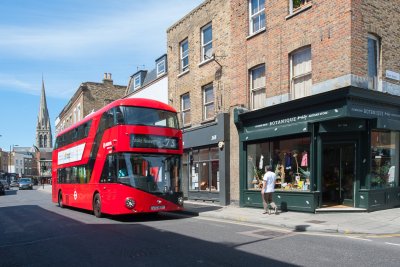 The Best Restaurants in Stoke Newington

Stoke Newington is one of those vibrant London neighbourhoods where independence and the local community is really celebrated and as such many chefs and restaurateurs are choosing the area as the place to put down roots and set up shop. It doesn’t hurt that it’s home to the best pizza in the world either.

The Andi this all-day joint is named after is Great British Menu judge Andi Oliver, who opened her own place after running supper clubs and residences with her business partner Kelly miles. The broad menu covers brunch (eggs, salt beef reubens, and healthy energy bowls) to brasserie-style fare (the likes of brown crab gnocchi with salsa verde and gazpacho, braised pork loin with breadfruit croquettes, and strawberry pavlova). Andi has put as much effort into the place itself, creating a real warm and welcoming neighbourhood hangout.

The informality of the décor at Perilla – an old tile floor and raw walls – doesn’t really give you any hints about what to expect on the plates. What you do get however is modern European food, like cuttlefish Bolognese and aged pork chop with sea kale that both looks beautiful and tastes fantastic. You can eat a la carte or from a tasting menu, which comes in at a very reasonable price for cookery of this standard. Don’t skip over the cocktail list either as they infuse their own gin and vodka in-house.

Dandy is another restaurant that’s gone down the familiar pop-up to permanent route. Previously operated as a café out of a shipping container in London Fields by Aussie owners Dan and Andrew, Dandy evolved into proper premises on Newington Green in the spring of 2017. As well as the restaurant, which serves up a seasonal and wide-ranging menu with everything from lahmacun to charred radicchio with miso and nori to fried chicken, Dandy has retained the passion for specialty coffee that was present at the café, so you can still swing by for a brew.

Often dubbed ‘the world’s best pizza’ and famously featured in the film Eat, Pray, Love, Da Michele chose Stoke Newington as the location for their first pizzeria outside of Naples. They keep things strictly traditional in their London branch, just like they’ve been doing for over a century in Italy. That means you get just two choices of pizza – margherita and marinara – so you can fully appreciate the quality of both crust and sauce.

The Good Egg is one of the area’s most popular brunch spots but it’s well worth dropping by for dinner. The evening menu may not feature any eggs but it certainly is good, with their range of breads and spiced butters and Middle Eastern delights like baharat roasted pumpkin with black tahini and yoghurt, za’atar fried chicken thighs with chilli honey and house labneh with preserved lemon. They’ve curated a fine list of biodynamic and artisan wines to complement all those punchy flavours, and their babka is also something special but it doesn’t hang around for long!

Located in what was formerly a garage (the old shop signage has been kept intact), Primeur offers a masterclass in simplicity. There are communal and counter seats, low intervention wines, menus that are handwritten daily and European small plates such as pork collar with apple and fennel, courgettes with basil and parmesan, and plum and almond tart that let the ingredients shine. There’s nowhere to hide here, which is what makes the experience of dining at Primeur stand out even more.

Wolf brings seasonal and regional Italian food to Stoke Newington and they do so with a wonderfully concise menu; there are only a handful pastas rather than pages and pages of different sauces and they are joined by plates like veal chop with brown butter capers and octopus braised in Sicilian wine. Of course, you’ll still struggle to whittle down your order but with its dark wood, marble and green accents and cocktails made with home-infusions, Wolf is a lovely place to linger over a meal.

The menu at The Lacy Nook roams between the Balkans and the Middle East, with a few Asian influences thrown in for good measure, making eating here an experience that feels comforting as well as intriguing. Traditional dishes like beef cevapi (a type of kofta) with kajmak (milk spread), avjar (roast red pepper spread) and Balkan bread is something you won’t see coming out of many other kitchens in town and the wine list also features some bottles from Macedonia. Another ace up The Lacy Nook’s sleeve is its secret garden, which is a total sun trap during the day.

If you want a burger in Stoke Newington, you go to Stokey Bears. The burgers are made with 100% Sussex beef, come with a range of top condiments, from bacon jam to Ribman Holy F**k Sauce and can be even stacked with triple patties. You can make it really messy with a side of buffalo hot wings and BBQ fries and they’ve got local craft beers to wash everything down with.